Here are the figures the OBR put out today put into a chart. The bars up to 2013/14 are actual data, and the bars beyond are their forecasts for the next 6 years. The green bar is the government’s budget balance. You can see that in 2009/10, the deficit was over 10% of GDP, and the OBR forecast it will be eliminated by 2018/19 when there will be a small surplus. 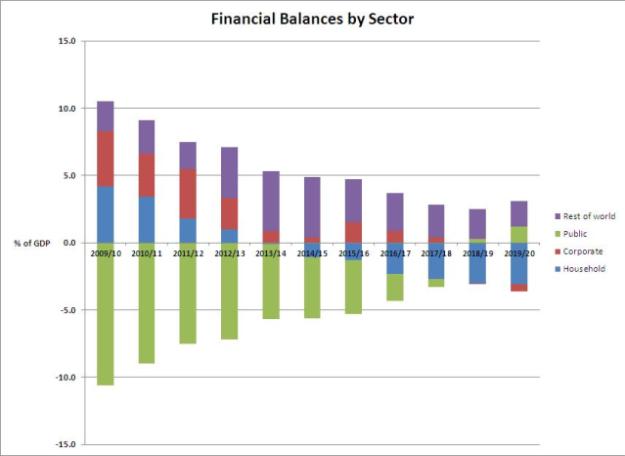 The blue bar on the chart is increasing quite significantly out to 2019/20. This is the household balance, and it is forecast to be in deficit going forward. That means the OBR expect households to spend more than they earn (in aggregate) year on year. How likely is this to come about?

To give some context, we can look at what the household sector’s balance was in previous years to see how feasible an outcome of a 3% household deficit might be. The figures going back to 1997 are contained in this post on Neil Wilson’s blog. Neil’s second chart shows that in the run up to the financial crisis (from about 2004 onwards), households ran a small deficit of between 0% and 2%. This contributed (partly) to the biggest crash in over half a century, but for the OBR’s forecasts to work out households would have to run deficits about double (or more) this level year after year.

Is this even possible without causing another recession before we get to 2020? I don’t see how it is. This chart from the OBR’s full report also shows the full picture since 2000 clearly.

The required rise in household debt is unprecedented in recent times.

This is only an excerpt – read the rest on alittleecon.