Here are a few facts to remember during the Conservative Party conference, when they will undoubtedly be determined to ram their myths about higher employment down all our throats. Over to (in this case, the very appropriately-named) Flip Chart Fairy Tales:

But, over the past few years, falling unemployment hasn’t led to higher wages in the UK or the US. If anything, wages have continued to fall as employment has picked up.

The picture is even stranger when you look at skills. Employers have been talking about skills shortages for some time now. Earlier this week, the UK Commission for Education and Skills (UKCES) published a paper saying that Britain is already facing a skills challenge and that the country will need 2 million more highly skilled workers by 2022.

UKCES expects the skills profile of the workforce to polarise over the course of this decade, as there is an increased demand for jobs at the high and low skill end while demand falls in the middle. 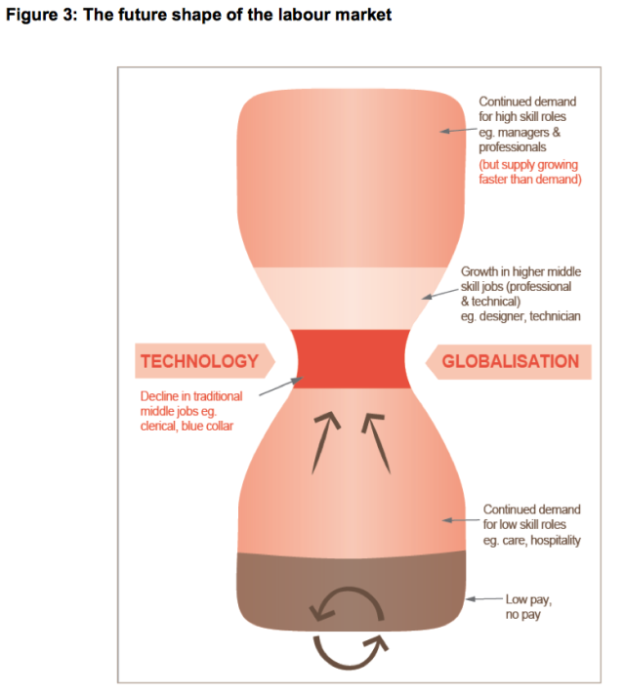 That’s not what seems to have happened since the recession though. The ONS data on skills indicate that the employment recovery has been largely a highly skilled one. This chart in the Bank of England’s inflation report shows that, while a lot of the very recent job growth has been in lower skilled occupations, most of it since 2010 has been among the higher skilled. (Definitions are based on the Labour Force Survey categories.)

I wondered how much of that might be due to the self-employed bigging themselves up in the Labour Force Survey. As the ONS said:

The nature of self-employment is such that many people manage their business and are therefore likely to state they are in a managerial role despite the level of responsibility they may have.

Using at the ONS data and applying the definitions the Bank used, I broke the same period down between employed and self-employed. 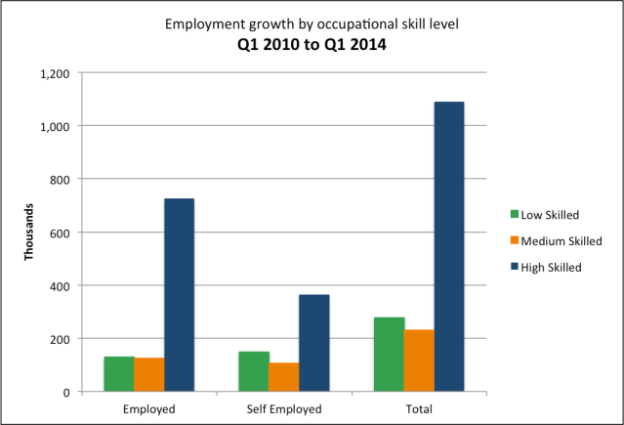 Among the employees, even more of the increase is accounted for by those in the highest skill groups, so bang goes that theory.

Take the figures over a longer period, since the start of the recession, though, and things look even more skewed. 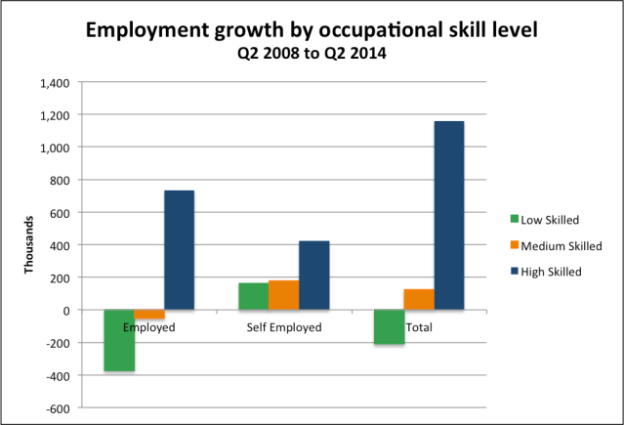 Almost all the increase in employment since the recession has been among the more highly skilled groups. There are still fewer medium and low skill employee jobs than there were six years ago.

There’s something else funny going on here, though. We’ve just had the longest decline in wages for half a century. It looks even worse if you include the self-employed.

Since the recession, pay has fallen by about 12 percent yet, over the same period, almost all the net gain in employment has been among the most highly skilled occupational groups. So we have a more highly skilled workforce earning a lot less.

Some of this may be due to the hours people are working, or not working. All the net increase in employment since the recession has come from self-employment or part-time jobs. Last week’s figures showed a slight fall in the number of employed full-time jobs for the second month running. There are still fewer people in full-time employment than there were in 2008.

There’s more – and you’ll have to visit Flip Chart Fairy Tales to read it.